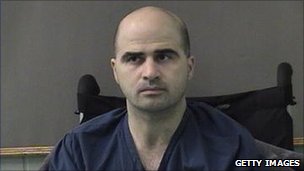 Maj Nidal Hasan spent months in hospital after the attack

Soldiers wounded in a shooting rampage at Fort Hood Army base in Texas are set to describe the attack in detail at a preliminary court hearing on Tuesday.

US Army psychiatrist Maj Nidal Hasan is accused of murdering 13 comrades and wounding 32 in the 5 November attack.

A judge is to determine whether prosecutors have enough evidence to try Maj Hasan, who could face the death penalty if convicted.

The attack was the worst ever at a US military base.